Skip to Main Content
It looks like you're using Internet Explorer 11 or older. This website works best with modern browsers such as the latest versions of Chrome, Firefox, Safari, and Edge. If you continue with this browser, you may see unexpected results.

Have fun with this guide! Some content is for class and some is just to explore!

How to search these books.

3. Scroll to the bottom of the page and click on one of the brown links to see information on another page. 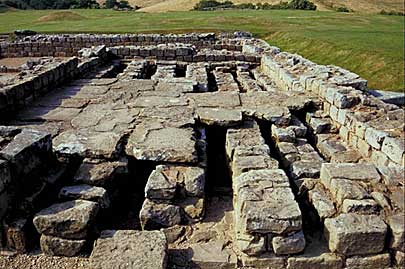 "This photograph shows the stone remains of a fortification along Hadrian's Wall in the north of England. The wall delineated the northern frontier of Roman Britain and was the site of several Roman military camps, like Vindolanda."

They call Latin a "dead" language. So why would anyone take Latin???

Why Rome is important

From Roman numerals to "toga parties," from the calendar to the names of the planets to a multitude of daily expressions, the influence of Rome is everywhere. Rome left the modern world a vast legacy, symbolized by the word legacy itself, which is Latin for bequest, a gift handed down. In fact, symbolize and more than half the words in the English language come from the Roman language, Latin. The system of laws of the United States has its roots in ancient Rome, a fact reinforced by the Roman- and Greek-influenced architecture that dominates the official buildings of the U.S. capital in Washington, DC. The English alphabet is based on the Roman alphabet, which in turn was derived from the Greek. In fact the legacies of Greece and Rome are so intertwined that people often speak of them together, using the term "Greco-Roman." The Greco-Roman heritage, along with the religious tradition of Israel, is the foundation of Western culture.

Watch this brief video to see why the study of Latin is important!

Romans used a numbering system that was based on letters.

Check out some of the resources below.